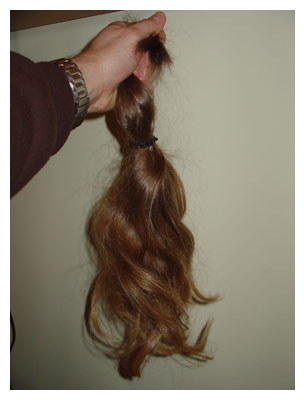 I finally got around to sending off the ponytail of hair that was butched from my head earlier this year to Locks of Love. About two weeks later I received my Certifcate of Appreciation in an email. That whole 4 year hair journey was definitely worth it. Sweet.

My first hands on exposure to the Kid Robot vinyl figures (or “dolls” as PHarrell likes to call ’em) was in 2003 when my buddy BoyKani hooked me with a Brooklyn Qee Monkey Cat Series 1 keychain for my birthday. I thought it was totally cool, and displayed it proudly in the home office (still in the package, I might add), but my desire to go bonkers and start a siiiiiiiick collection was still dormant. And even in 2004, when my pal Peter D was in town from Europe and his UK homey Sums had him in the KR shop picking up new stuff almost daily, I spent a ton of time browsing, but zero time buying. Then again in early 2005when James & Fi from Britian were staying with us, they showed back up at our pad maxed out with KR goodies. “We’re totally freakin’ out, mate. Dunny, Munny, Labbit…”, was all Fiona could say. I thought, “man, that’s pretty cool.”, but again, no urge to partake.

All that changed last summer though when I received an email from Cho’nuff saying that the Gorillaz were sitting front and center, in all their vinyl glory, in the Kid Robot store window. That did it. The wallet was pulled out, the plastic was swiped, and I became the proud owner of one of the (supposedly) limited edition sets of the Kid Robot Series 1 Gorillaz figures. Uh oh. 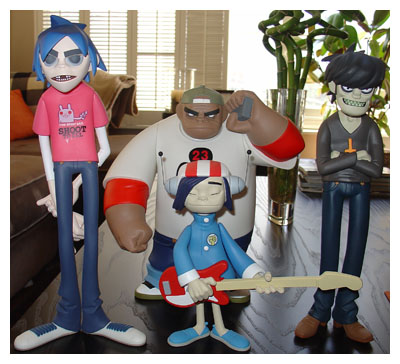 I went back into hiding for 6 months until Fiona got back in touch to beg and plead with me to go pick her up a set of the just released Series 2 Gorillaz. I was scared, but I agreed. When I arrived at the store, two things happened. First, a really cool Baseman Dunny had just been released, and it was only $30 (what a bargain!!). Second, there was a poster saying that Frank Kozik was going to be in the house, signing his new Bondage Edition Smorkin’ Labbit on Monday. I grabbed Fi’s stuff (and the Dunny) and headed home.

Monday rolled around and, although I was torn, I knew I had to head back to KR for the Kozik signing. I mean, Frank Kozik is a legendary rock and roll poster artist who I’ve admired for years, and to pass up an opportunity like the one I was being presented with just because I live in San Francisco and have access to all kinds of amazing artists would have been super lame.

So there I was, 6:45PM on a Monday nite, in line on Haight Street with 50 or so other Kid Robot geeks. But I felt good about it and lucky to be there. There were a few people who were there only to make a buck (as a quick Ebay search later proved), but for the most part everyone was anxiously waiting in line, excited to be the first to get their hands on this brand new Smorkin’ Labbit and even more stoked to get it signed by the man.

Finally it was my turn. I paid my $40, my Labbit was pulled out of its box, handed over to Kozik, and he did his deed… right where it counts. Nice. 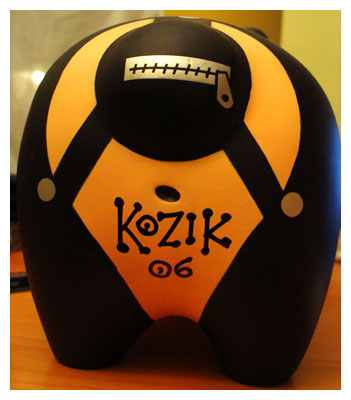 I even got my picture taken with Kozik, and they put it up online in Kid Robot’s Bondage Labbit Signing Gallery. Supa sweet. Can you guess which one’s me? 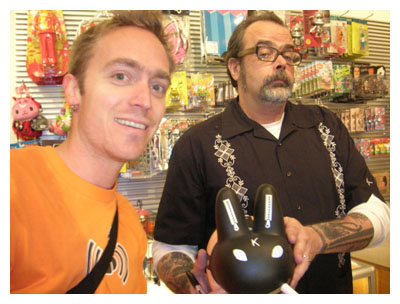 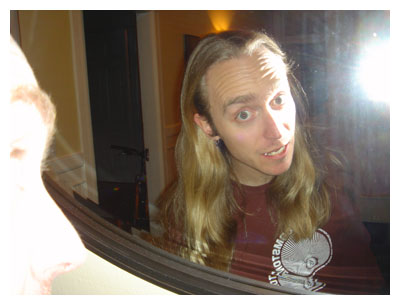 Nope, I’m not going bald, at least not yet. I might have a pretty big forehead, but otherwise things are still nicely filled in. What has happened recently though is a not so insignificant reduction in the length of the ol’ mane. That’s right, I got a haircut. A big honkin’ haircut.

To back up a bit, I never intended to let my hair grow out again, but it happened. It all started in 2002 when So! and I picked up and spent the end of spring, all summer and the better part of the fall traveling. We blew through NYC, Boston, the Carribbean, Australia, Hawaii and Atlanta before settling back into good ol’ SF. When we started in May, my ‘do was short and spikey and freshly bleached. When we finished in November, it was all shaggy and starting to grow out (a la Bo Duke as one of my buddies was quick to point out). It hadn’t been that long in like 8 years, so I decided to leave it alone and see what would happen.

About a year later I got a call from my haircutter Joseph. He was ringing to inform me that he had moved shop and to be sure to keep him in mind if I wasn’t happy with whoever was currently cutting my hair… to which I replied, “Dude, I haven’t had a haircut in 18 months, and you’re the last person who cut it!!” I went in to see Joseph right away, and that’s when it hit me that I was gonna let it grow until it was longer than I ever had it. Joseph was pretty stoked with the idea, so he cleaned me up and sent me on my hair growing way.

A year after that the hair started to really bother me. I was finally to the point where I could pull it all back into a ponytail which was nice, but it also meant that I was to the point where washing it sucked, letting it dry took all day and waking up with it down my throat was happening more often than I would have liked. My “grow the hair longer than ever” goal was still in effect, but it was starting to seem somewhat ridiculous… until I stumbled upon Locks of Love.

In case you’ve never heard of it before, Locks of Love is a non-profit organization that provides hair pieces to financially disadvantaged children 18 years and younger suffering from long term medical hair loss. Their first rule of donation states, “We accept 10″ minimum hair length (tip to tip), not wigs, falls, or synthetic hair”. At that point my hair was just under the min length, so I renewed my quest, making my main objective hooking up a needy kid with a siiiiiiiiiiick new wig… only they wouldn’t get it until I had reached my “grow the hair longer than ever” goal. Sweet.

Fast forward to January 2006 and there I was with a mane running 1/2 way down my back. The time had come. The question now was, “Who gets to cut my hair?” Joseph had moved to a new salon in the Marina district, and even though I really dug the cuts he gave me back in the short & spikey days, I try to steer clear of that side of town, so that was out of the question. My buddy Bob suggested Elana at The Salon. His hair was lookin’ pretty tight, and it turns out that The Salon was only 4 blocks from home, so I made an appointment, went in and let Elana at it.

Over the next hour, Elana had a blast taking my hair from super long to mega white trash mullet to hipster wannabe before finally settling in on ultra short and spikey. She finished off with one of her infamous shampoo/head massage combos and I was out the door and on my way.

In the past, such drastic hair cuts have totally freaked me out mainly because they were done somewhat against my will. Not this time though. I walked out of The Salon feelin’ really good and with no regrets whatsoever. So! was pretty stoked with the cut (although she prefers it a lil’ longer) and I had in my possession a 16″ long ponytail that was going to be donated to a kid who could really really use something to smile about. 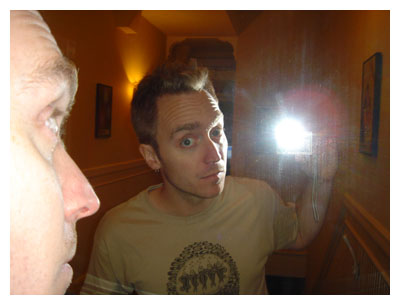