If you want some kick-ass web-based free streaming music, then look no further than SomaFM. I’ve been listening to their “Groove Salad” channel for more than 1/2 a decade now, and it’s done me right every time. And if you become a regular listener, you really should show a bit of love with a $$ donation every now and again. They’re totally listener supported, and are completely worth it. 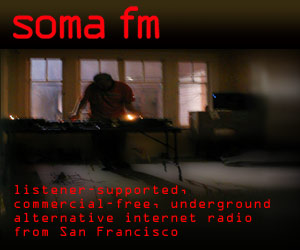 I thought my days of being interested in R.E.M. were over, but then Cho’nuff hipped me to a website by Matthew Perpetua, the dood who also does the MP3 blog FLUXBLOG. “Pop Songs 07” rocks my world in that it has one very simple goal: “…write a post about every song on every R.E.M. album, plus most of their major non-album tracks…”.

Anyone who’s known me for long enough is also aware that I was, at one point, one of the biggest R.E.M. geeks on the planet. And though my obsession for the group in its current incarnation has severely waned over the past two albums, my love and appreciation of their first 18 years is still as strong as ever.

If you are, or ever were, into R.E.M., do yourself a favor and dig around the Pop Songs 07 site. There’s some crazily insightful stuff being posted, even if it is just one person’s take on a great band’s body of work… 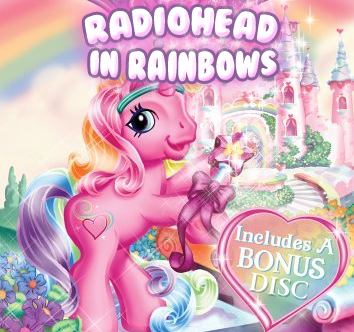 Sleep was escaping me at 4AM this morning, and as I laid there wondering what the hell I should do for the next 3 hours, it hit me: the In Rainbows digital download should be waiting for me in my in box! I jumped out of bed, ran into the office, opened my email, and there it was. I pulled it down, cranked it up, and have been taking it in ever since.

This album definitely does not disappoint, although I would have been a bit bummed had I not purchased the 40GBP super deeeeeluxe discbox double LP/CD set (arriving in my physical mailbox around December 3rd, awwwwwww yeah!) + download, and had opted to go the digital download only route instead. You see, Radiohead did something tricky with the digi dl only option. In essence, they said, “Hey music fan, yeah you the one who doesn’t think that you should have to pay for music. Come to our website and buy our new music for what you think it’s worth. Even if that amount is ZERO.” I’m sure this pay what you want for the download only strategy resulted in a very large number of people going to the Radiohead website, putting the album in their cart, typing in 0.00 and checking out. Well guess what? If you went digi-dl only, all you got from Radiohead was music, and at non-CD quality. Sure, it cost nothing and is DRM free, but it’s encoded at only 160 kbps and contains no artwork. 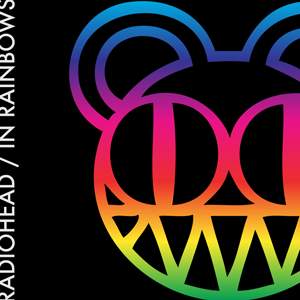 Now I know that those who paid for digi download only and/or who care about MP3 encoding bitrates will BitTorrent the album once the CD is made available and a higher quality version is leaked, but I’m sure it will have made many of them stop and think about the value of music, if only for a second. In our day and age that’s not something that people are compelled to do that often, if ever. So if you’re one of those few souls who did pay more than zero for the digi download and are currently feeling a bit burned by the band, look deeper and try to appreciate the thought provoking nature of this “experiment” and how it has the potential to invoke some real change in how artists approach the merchandising of their products with little to no involvement from a major label.

And if you just can’t wait for the Stanley Donwood artwork that NME reported on, point yourself over to HICKSDESIGN’s Cover art for In Rainbows blog entry and take your pick from one of the many fan inspired designs. Something for pretty much everyone. 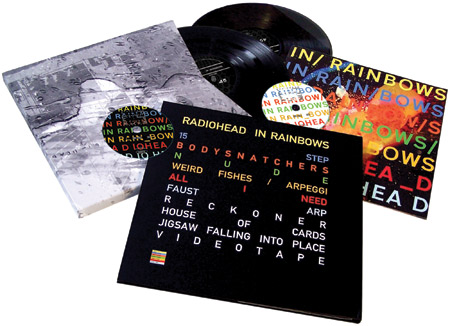 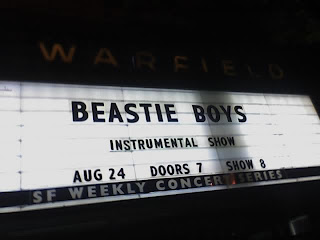 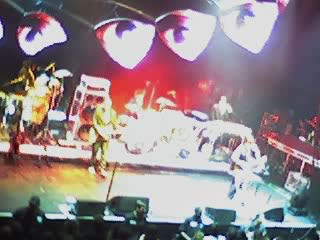 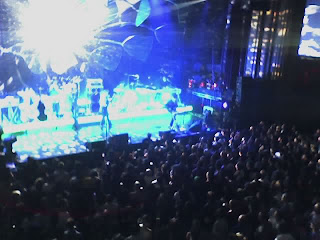 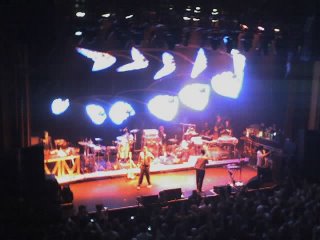 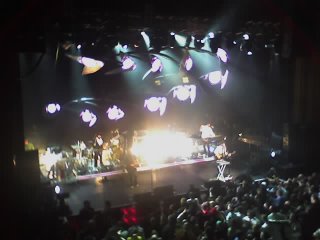 Man, I’ve been so caught up in JuniorFlav land that I pretty much figured I’d be off the map here for at least a few months. That would have been the case had I stuck with my original internal plan and backed out of the late nite that was Magda and Richie Hawtin at Mighty last Friday nite. You see, sleep has been alluding me for the past few weeks, and I was pretty much driven to the point of giving up on going out until I received a few encouraging words from some other father-friends. The first one told me, “Go home, take a nap and go out!!”, which was pretty convincing, but then the other one said, “Dude, take advantage now, because it’s only going to get worse from here.” That one did it. I kept my trap shut, sucked it up, met up with Cho’nuff and we headed over to Mighty.

Upon arrival, Magda had already taken the decks and was in the midst of working the crowd into a steady groove. The place was pretty full and was only getting fuller. Mighty is no Mezzanine in terms of capacity (anyone have any idea how many Mighty holds?), but the promoters that brought this duo to town didn’t seem to notice that they were no longer hosting Hawtin off of Jessie St. The notice that they sent out on Friday afternoon even said, “the remaining 300 tickets will be sold at the door.” *Remaining* 300?!? Mighty seriously looks smaller than 111 minna, and that place can’t legally hold more than 600 or so. Remaining my ass. What gives?

Anyways, I did enjoy Magda’s set, but realistically we more or less spent the entirety of her set having a few drinks, catching up with friends and getting settled in for the evening. And then around 1:15AM the entire landscape of the nite changed. Hawtin grabbed the helm and immediately brought things up and up and up until there was a crushing frenzy within the beyond capacity crowd. It was hot, it was loud, it was bangin’ and everyone was going bonkers. About an hour in I realized that Hawtin had spent the previous 60 minutes working some crazy voodoo techno majik and had the entire crowd in the palm of his hand. We had gone from bang zoom to deep journey and no one even noticed the transition. All they knew was that they were on a ride that they couldn’t easily eject from. 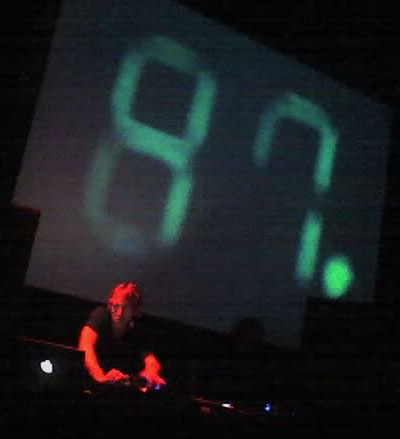 Richie kept this pace up until roughly 3AM, at which time he quickly pulled the bus over and let all those who couldn’t hang get off. I couldn’t believe it, although I had experienced the same thing two times before when we saw him at Mezzanine… an hour after the booze runs out so does the energy of 1/2 the crowd, so they all bail, yet the show goes on. All of a sudden, we were left with a club that was at capacity, but still full of people who had no where else they would have rather been. What ensued from there is pretty much indescribable. What I thought was deep from the 2nd third of the set turned out to be not so much, and what I thought was banging from the 1st third paled in comparison.

Hawtin sucked us in, slapped us around, spit us out, and just before letting us get away, did it all again… over and over and over during the last hour of his set. And then for the last 15 minutes, he just toyed with us… taking it down, and then bringing back the bass. THUMP. THUMP. THUMP. THUMP. THUMP… and then down again and then… THUMP. THUMP. THUMP. THUMP. I have never in my life been in such awe of a live music experience, and up until now I was pretty sure I had had my fill of bone chilling, life changing musical adventures. Apparently this is/was not the case. All I really have to say to that is, “SIIIIIIIIIIIIIIIIIIIIIIICK!!” Just knowing that I can still have a nite like last Friday really helps me keep the faith in terms of new music. And whenever I fall back into thinking that the world is destined to become full of a bunch of noisy shit, I’ll just harken back to that nite and rememeber that somewhere out there, things are aiiiiiiiiiiiight.

Oh, and if you haven’t yet, do yourself a favor and go experience a nite of Richie Hawtin before you kick the bucket. I’ve learned my lesson about questioning whether or not I need to be in attendance on a Hawtin nite, so if you happen to do it in San Francisco, then keep an eye out for me and Cho’nuff, ‘cuz we’ll definitely be there.

And mucho thanks to Cho’nuff for pushing me in this direction musically, because if you hadn’t, I would have never known what I was missing. Foeweel.

If you’ve found yourself groovin’ along to any type of sample-based music over the past 20 years, whether it be hip-hop or electro or drum & bass or jungle or pretty much anything else that’s not strictly guitar + bass + drums, then you’ve got to check out this 20 minute clip on the history of the infamous “Amen Break” 6-second drum sample. Amazingly insightful stuff, and a damn good history lesson to boot.

This fascinating, brilliant 20-minute video narrates the history of the “Amen Break,” a six-second drum sample from the b-side of a chart-topping single from 1969. This sample was used extensively in early hiphop and sample-based music, and became the basis for drum-and-bass and jungle music — a six-second clip that spawned several entire subcultures. Nate Harrison’s 2004 video is a meditation on the ownership of culture, the nature of art and creativity, and the history of a remarkable music clip.

You can thank my pal Satya for hookin’ this one up. Nice one.