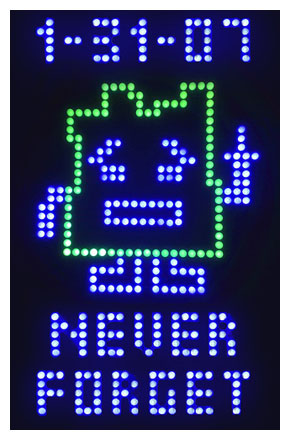 The fallout from Boston’s freakout about the Aqua Teen Hunger Force Guerrilla ad campaign continues to amaze me. It all started at 8:05AM on 01.31.2007, when someone reported an unidentified device attached to an overpass on I-93 in Boston, and the city responded with “an army of emergency vehicles”, effectively shutting down parts of the freeway and ensnarling morning rush hour traffic. Then, that same evening, the two goofballs who placed the devices in Boston were arrested and charged with placing a hoax device to incite panic. And just this past Friday, Jim Samples, a Cartoon Network GM, resigned due to the negative publicity, and also agreed to pay Boston $2 million in damages… this is all due to some glorified Brite-Lite type devices being slapped up around the city of Boston. Whaddup, paranoid?!?

It’s funny that these things were also scattered all over New York City, Los Angeles, Chicago, Atlanta, Seattle, Portland, Austin, San Francisco, and Philadelphia, but yet were barely a blip on the radar in any of those cities. In fact, here in SF, Jamie Alexander, the owner of the Park Life Store, found one attached to the sign above his shop. His response was, “I thought, ‘What the hell is this?’ “, followed by, “I left it up. I though it was cool.” Jamie, what were you thinking? The terrorists could have been so close to blowing your ass up! I’m stoked to see that you (and your shop) prevailed.

There is a sliver lining in this cloud of ridiculosity though. A rad new commemorative T-shirt, one that would have probably never seen the light of day had all of this not gone down, was unleashed upon the interwebs. I know I’m gettin’ in on that one!!

I’m sure my extended family is all but destroyed that Da Bears took a pummeling in this year’s Super Bowl, but not everything that went down during those 4 hours was bad.

So! and I were flying back from a quick hop to Palm Springs while the Super Bowl was being played. We were there to celebrate what was about to be the beginning of her “no fly” period. During our 27 hours in the desert, we: ate lunch outside at Tyler’s Burgers, took a ride up the Palm Springs Aerial Tramway, went on a scenic, snow covered hike at the top, ate dinner at Blend Restaurant in La Quinta, kicked it poolside at our hotel, The Westin Mission Hills Resort & Spa (So! also got herself a massage), swung thru the really good Desert Hills Premium Outlets, and manage to drive over 120 miles. Good times.

Anyways, by the time we made it to the airport and through security on Sunday evening, we had about an hour to kill before our plane boarded. We got ourselves a decent table in the bar, ordered up a sammich & some drinks and proceeded to watch the Bears get scored on again and again. In between all of this ass whooping, they showed some commercials. We knew that all the good ones had probably already been aired, but we watched anyways. Lame spot after lame spot ran (why so many companies run crappy ads during the Super Bowl, a time when they should be pulling out all of the stops is beyond me), but we continued to stay focused on the 25″ screen that was perched up above the semi-crowded bar. A short time later, the FedEx Ground commercial ran, and looking down upon us was a face that was very familiar to me and So!(but not so familiar to anyone else in the room). After what seemed like an eternity, the outer body experience that I was having pulled back inside, and I found that I couldn’t contain myself any longer. I finally let it all go and blurted out, “HOLY CRAP, THAT’S JOHN MCCARTHY!!”.

Yup, John McCarthy. A dude who goes way back to my brother’s class during the St. Pius X High School days in the ATL. I know he’s been working and acting in NYC for the past 8 or so years, and it doesn’t surprise me that his talents landed him in a nationally run ad campaign. I was just floored that there he was, in a commercial, being run during the friggin’ Super Bowl. Talk about crazy exposure.

I emailed back and forth with John’s sister, Ann, and she told me that he had no idea that the ad was going to run during the Super Bowl. Nutz. She also hooked me up with a link out to the commercial on iFilm. Check it out (and if you’re feeling thick today, he’s the dude reciting the title of this blog entry)…