A few weeks after Pearl Jam’s first album, Ten, came out, I had a chance to see them live on campus at University of Georgia for $3. Eddie’s voice was thrashed due to illness, but they were still able put on an amazing show to a relatively small crowd (and did I mention that it was only 3 bucks?!?). I was hooked. A killer new band that rocked the house that not that many people knew about. Right up my alley. I was in heaven until a month or so later when Pearl Jam’s Seattle neigbors released their album and ruined it all.

You likely know the story. Nevermind was unleashed upon the masses, and set off a musical explosion that no one was expecting. While it was great for the careers of many of the artists impacted by all of this, I think a lot of people were left feeling that “their” bands had been taken from them and handed out to the very white suburban mainstream fratboy/girl mofos that this music was helping them escape from. There were plenty more, but the big immediate losses for me were Smashing Pumpkins, Soundgarden and my newly discovered Pearl Jam. After each of their big breakthrough albums, I found myself retreating from all three of these groups, not paying a whole lot of attention to susequent releases. 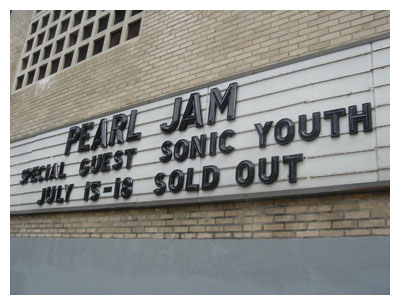 A few years later most of the “grunge” bands had imploded due to death or freak outs from overexposure. Pearl Jam was still around though. Somehow during the insane hype of it all, they decided to take a stand by 1) not ho’ing themselves out via videos and talk shows and other stupid over-promotional B.S., and 2) taking Ticketmaster to the Supreme Court, claiming the TM was running a monopoly. The result of this was that they were able to fade from the media limelight with their integrity and sanity in tact, becoming the band that they had probably hoped they’d be (in terms of exposure) from the beginning.

So here we are in 2006, 15+ years into PJ’s career, and all of a sudden they’ve changed up the way they operate. New album, new video (first one since Jeremy) and a real live headlining tour. Yup, they’ve decided to step up to the plate for their fans, putting their Ticketmaster grudge to the side for the timebeing, and bring their live act to the masses. 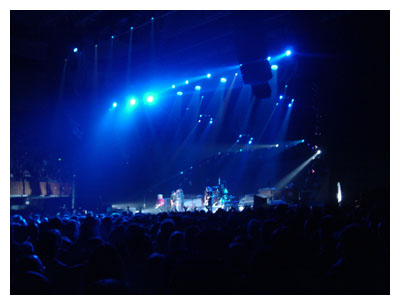 My boy, PHarrell (no not that Pharell, but the original: Patrick C. Harell) was still in town after the Afoostic shows, and being the PJ phreak that he is, deemed that we catch not just one, but two of their three sold out nites at the Bill Graham Civic Center here in SF. So we attended, and they friggin’ BROUGHT IT.

Now, I haven’t been the biggest Pearl Jam supporter through the years, and in fact I’ve had my major PJ naysaying periods, but all that was left behind as soon as they took to the stage on nite one. The size of the venue was perfect for a show like this, and we had a really good vantage point on the floor, just to the right of the stage. The band was in rare form, playing really well together and all seeming like they were having a blast. And Eddie was Eddie. He belted, he screamed, he pontificated and he drank. Two bottles of red by my account. They played new tracks, and everyone nodded along, some singing. And they played old tracks, and every middle aged ex-fratboy went completely bonkers. I don’t think I’ve ever experienced as many 30somethings rocking out and singing along like that in my life. I realize that it probably sounds cheezy as crap from an outsider’s perspective, and I would have to totally agree if it hadn’t been so damn fun. Good times.

So all you current Pearl Jam haters who, at some point back in your late teens or early twenties, used to really dig this band, you’re the ones who need to get out to one of their shows and give them another chance. I know you don’t want to now, but tell me what you think afterwords.

This past weekend kicked off with the Thursday afternoon arrival of my boy Patrick C. Harrell from the ATL and his good buddy Steve “El Duque” Hernandez from LA. I blew out of work a bit early and hooked up with these two for a couple of cold guys at The Transfer, just down the block from home. From there we grabbed a pizza, headed back to the hizee to meet up with So! and then ran down to BART where we hopped the train with Justin & Kristen. Destination: Downtown Berkeley for nite 1 of the Foo Fighters “Afoostic” tour at Berkeley Community Theatre.

Lucky for us that we figured out beforehand that since the venue is on the Berkeley High Campus, there’s no drinkin’ allowed in the BCT at all. Given that we were lookin’ at a 2 hour plus show, we made a quick pit stop close by at Jupiter for a few microbrews before heading in. 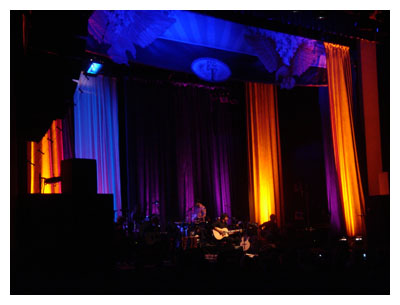 I’d never been in to the BCT before, and although it was intimate, it was much larger than I had expected. The balcony was pushed pretty far back, but we had 5th row, so no complaints there. The only complaints that I do have are 1) that the dude to my immediate right (which was formerly So!s immediate right until she made me swap seats with her ;o) thought he could sing just like Dave Grohl, belting out songs all nite long, and 2) that it was Georgia hot and pasty all up in that place. Now, I know the Berkely phreaks don’t want to use air conditioning for fear of polluting the environment and all, but open some friggin’ windows or turn on some fans (or serve ice cold beers) for crissakes.

Anyhoo, the Foos played and the Foos kicked some ass. The lineup for the show consisted of either a solo Dave with acoustic guitar strumming out some of the quieter tracks, or a full on 8 piece band, that included more guitars and a violin in addition to the regular Foos. The band pretty much played the 2nd disc of “In Your Honor” in it’s entirety, and then picked and chose select tracks from their other albums. The hands down highlight track of the evening was a rendition of “Floaty” from the Foos’ eponymous debut album. For this song, Dave handed the mic over to Petra Haden, who is their touring violinist. I wasn’t so sure about this move until the band led in and she started singing. As soon as she opened her mouth, my jaw hit the floor and I picked it up about 4 minutes later. What a crazy, amazing voice… the only word I can think of to describe it is angelic. Definitely a good choice for vocalist on that trac. Other songs that really stuck out were “Friend of a Friend” about the dudes in Nirvana, and “Razor”, which Dave played all by himself. Give that one a listen sometime and imagine playing guitar and singing at the same time. I’m no musician, but that crap doesn’t sound easy to me. At all. 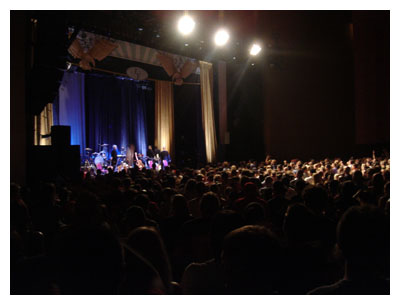 When music wasn’t being played, the show turned in to the Dave Grohl comedy hour. Homeboy can tell some hilarious stories and totally feeds off of the crowd. “Weeds and hotdogs”, “it’s like a goddamn Cypress Hill show in here”, “Tiny Dancer is the bane of my existence”, things he’d like to do to Petra… will all tickle yer funny bone if you were in attendance.

A jammin’ acoustic orchestra mixed with laughs? I can dig it. In fact, we dug it so much that PHarrell, El Duque and myself went back for round 2 the next nite. And once again, the Foos brought it.

Here’s a pretty good review of both shows from The Willits News: Dave Grohl finds nirvana in acoustic show

Check the Foo Fighters website for notes and photos from nite 1and nite 2.

We were lucky enough to be able to experience the World Cup Finals in a very unique setting yesterday, on the lawn over at Dolores Park. From what I understand, a local German dude known as the “Teacher With The Bus” was a bit frustrated that no one was throwing a big outdoor World Cup shindig in San Francisco, so he took matters into his own hands at the last minute and threw an all day party. Using his local celebrity he was able to get businesses to put up 1/2 of the $15,000 that it cost for permits, to rent the huge 9′ x 13′ screen & the crane to hold it, get the port-o-potties and have the SFPD on hand to secure it all. The other 1/2 of the costs came straight out of his own pocket. Talk about a guy who’s willing to go the extra mile to see that his local community is given the opportunity to experience this international event as it is in so many other countries in the world. 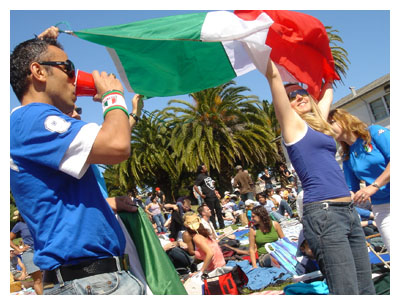 So!, Smokey and I knew that the park would no doubt be jam packed for this, so we went the smart route and headed over two hours before game time. We arrived just after 9AM, set up shop at what was currently the back of the crowd, about 150′ or so away from the screen. At that point there were about 200 people spread out on roughly 1/4 of the main lawn area. Over the next two hours, friends showed up and people trickled in, filling up the rest of the lawn. It was crowded, but comfortably so… and then the game started. It seemed like as soon as the screen came to life, the place really packed in and absolutely erupted with excitement. Estimates on the number of people in attendance range from 3,000 (that was me eyeballing the place after a friend said, “you think there are about 1,000 people here?”), to 10,000 which was more of the “official” count. 10,000 people gathered to watch the World Cup Finals!!! Talk about a blast: the sun was in full effect, the bloody marys & mimosas were flowing, locks & bagels were being eaten, Italian & French flags were flying and people were going ballistic. 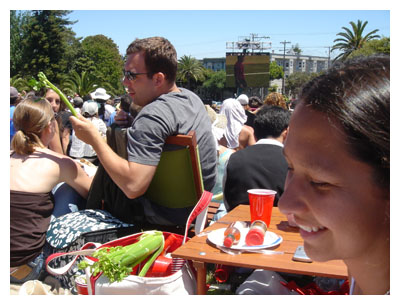 In the end Italy beat France 5:3 in an overtime shootout, but you probably knew that already so I’ll stop here and say that the “Teacher With The Bus” kicks some serious ass and deserves some big ol’ shout outs (and PayPal donations) from the folks in SF.