Dude, what the hell is going on here? This was supposed to be a great year for the Tour de France. This year was first time that http://www.lancearmstrong.com/ wasn’t going to be riding since 1999, and it was set to be a doozie. Jan Ullrich, who is in the twilight of his career, and Ivan Basso, who’s given everyone a run for their money lately, were both looking awesome as the top two contenders. And on top of that there was a whole slew of other riders who were going to make sure that the pressure was kept on. I’ve been looking forward to this since the end of July last year.

And then this news came out…

Ivan Basso, Jan Ullrich and Francisco Mancebo, the three outstanding favorites to win the Tour de France when it gets underway in Strasbourg today, were sent home yesterday after their names were linked to a drugs syndicate in Spain.

Guilty by implication rather than any solid proof, the three riders have all denied any association with the drugs bust five weeks ago which was known to Spanish police as Operacion Puerto. There names appear on an official list sent to the Tour organizers late on Wednesday.

Spanish police investigating doctor Eufemiano Fuentes, who is accused of trafficking in all types of performance enhancing drugs including growth hormones and the blood booster EPO released the list which contained up to 58 names of riders who are accused of visiting his premises in Madrid… [MORE]

Now So!s all down in the dumps that her Italian’s not there to represent, and I’m majorly bummed that an American’s probably going to win it just because these two dudes got yanked. There better be some real proof on this crap, because pulling the top two contenders out of this race due to “allegations” is a pretty serious thing to do. I’ll still be watching like the Tour de Phreak that I am, it just won’t be the same. 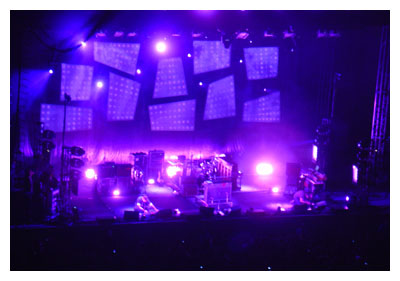 Every time I’ve seen Radiohead, I’ve always walked away going, “Damn, I wish they were playing again tomorrow nite because I’d totally go again.” Well, my wish came true this past weekend. Radiohead played two nites at the Greek Theatre in Berkeley, and I had the amazing fortune of being able to attend both. If you find yourself reading this thinking, “Why would you want to see the same show two nites in a row?”, then there’s a good chance that you’ve never seen Radiohead live. The sound & light show, combined with the energy of the band & crowd, coupled with Radiohead’s repertoire and the fact that they are one of the tightest live acts around right now all add up to one jaw-on-the-floor mindbending experience. Something I’m definitely down with checking out 2x in a row. The really killer thing was that, other than a few repeated tracks, the two shows this past weekend were almost completely different. More “mellow” by most accounts on Friday and “fly me to the moon” insane on Saturday. Good times. Damn good times. 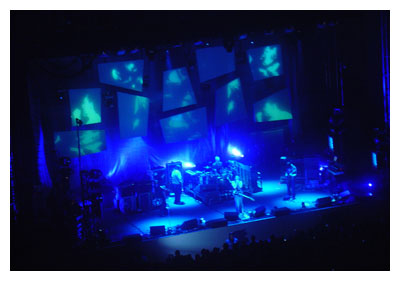 Friday, June 23 was me, Cho’nuff, Vinimal and Uyen kickin’ it center lawn.

Encore 2:
22 House of Cards
23 Everything In Its Right Place [“ANDEVERANDEVERANDEVER” scrolling on video screens above stage]

(more about this show at at ease and green plastic)

(more about this show at at ease and green plastic)

…continued from Part I.

Since we’re such high rollers, we plunked down EUR € 3 extra for first class train tickets to Venice. When we got on board though, we quickly realized that just because you’re holding a ticket does not necessarily imply that you get a seat. We checked every cabin in the first class car and when we were completely out of luck, ended up standing with all the suckas crowded together near the bathroom (hey, at least it was the first class bathroom!!). The highlight here was the two American bozos who were complaining to the conductor about how, “Someone must be in our seats because we bought first class tickets and every single spot is taken up.” To which he replied in broken English, “Ehhhhh, first-a come-a, first-a served-a (Americani stupidi)…”. People began deboarding about 1/2 way to Venice though, so we were eventually able to find two adjacent seats that let us kick it while watching Italy whip by. An hour or so later we arrived at the Venice train station where we said, “ciao!” to conventional modes of transportation for the next few days. 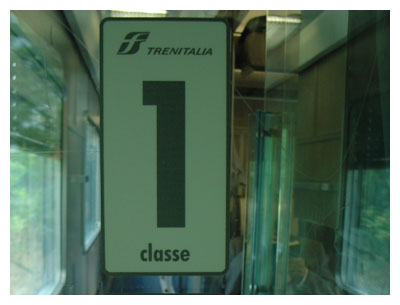 Just outside the train station we crammed in to the water shuttle which took us straight down the Grand Canal. This being my first real firsthand look at Venice, I was dumbfounded. The walkways and waterways were teeming with life and the buildings appeared to have sprung up straight out of the water. There were tons of tourists taking their EUR € 75 Gondola rides, but there were just as many locals going back and forth in working boats and taxis. At the end of the Grand Canal, we jumped off with our wheeled luggage in tow and joined the fray. 2 canal bridges and a few side alley ways later and we were at our hotel, The Westin Europa & Regina.

Today was our two year anniversary and we wanted to get out and soak up some of Venice. We cruised thorough St. Mark’s square where we watched hundreds of stupid tourists getting their picture taken with pigeons all over them. This is supposedly an illegal practice, yet there are two licenced bird seed vendors smack dab in the middle of the square! Then through St. Mark’s Basilica, which was really amazing, but packed to the gills with tourists. Then out past the Doge’s Palace to the water where we walked by the Bridge of Sighs, which was covered in tourists. I think So! could tell that I was growing tired of the touristy masses, so she pointed us in to the city via one of the mostly deserted alley ways. This was much more my speed. Cool shops, good restaurants, locals hanging out… I started to relax and really enjoy Venice.

Now that we were in our groove, we had some stuff to take care of. First stop, the jewelry store. I promised So! a ring a while back, and because her family used to spend so much time here, she knew exactly from where she wanted to get it. The guy in the shop was really cool and ended up giving us a good deal. So! walked out sportin’ a sweet new ring and was all smiles all nite long.

Feelin’ good, feelin’ great, we moseyed over to Harry’s Bar for some drinks. Sonia had one of their famous Bellini’s (they made this drink up), and I had a Martini. Definitely overrun with tourists, but we got there early enough and the place was small enough that it was still cool to check out. 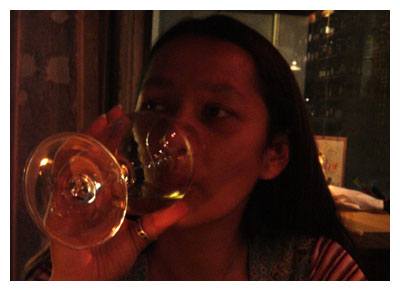 It was getting to be time for dinner, so we headed back into the deeper parts of the city and found a great restaurant. They were pretty booked up, but So! busted out some Italian and the dude hooked us up. After a few drinks at a really killer wine bar around the corner, we had a table right in the front window. This turned out to be a perfect spot because it was quiet enough where we could talk, but was also busy enough where we could still be in with all the activity inside and out of the restaurant. Some good wine and good food and we were on our way back through the labyrinth that is Venice to our hotel. 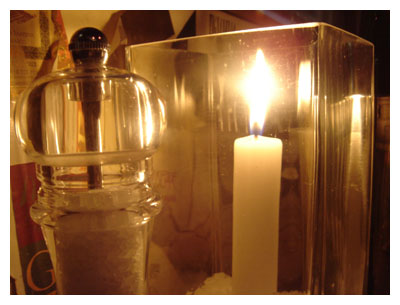 Tomorrow we head to Murano…

Our trip to Italy began with an extended bit of travel. Left the house in a cab at 11:30 AM on Friday, flew from SFOto Frankfurtand then from there to Milano. Once out of the airport, we hopped the train into the Milano city center and got picked up by some friends who were kind enough to let us hitch a ride in their car for the two hour ride to Verona. We finally checked into the Hotel Accademia and immediately plopped down on the bed sometime around 5:30 PM on Saturday.

We were in Verona for Riccardo and Lara’s wedding, so after chillin’ out and freshening up, we met up with some peeps and headed over to the rehearsal dinner. The wedding festivities were kicked off at an Italian Pizzaria located inside an old church. Given that this is Italy, when I say “old”, I am talking old, as in many hundreds of years. From the heavy materials that were used to construct the building, to the significant wall cracks that were noticeable here and there, you could tell that this place had some serious history. We had our fill of antipasti, wine and pizza and then exhaustion crept in. It was back to the hotel for some much deserved shut eye. 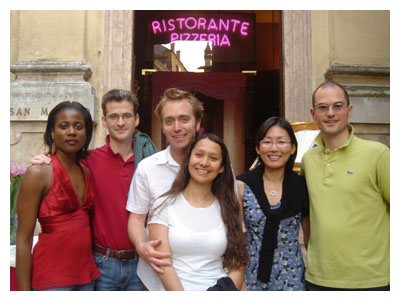 Jetlagged as a mofo the next day, we drug ourselves out of bed and into the streets of Verona. We didn’t have much time before the wedding, but Verona proper isn’t so big, so we were able to grab some grub at a local restaurant and then walk around enough that we got to take in most of the major sites, including the Casa di Giulietta (yes, the “real” house & balcony of the fictional Juliet… and the tourists were eating this up). 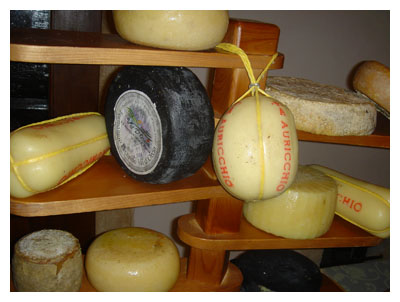 The wedding was being held at a villa on the outskirts of Verona, so later in the afternoon we got on a bus that was chartered for the occasion and were taken over with the rest of the wedding goers. After the extended Catholic-Jewish, Italian-English ceremony finished up, it was time to party. As you can probably guess, we ate and drank like royalty. Started off with an insane assortment of antipasti and cocktails, followed by a just long enough sit-down meal, then on to the after dinner cheese bar (with over 40 different kinds of cheeese!!) and finally dessert and some groovin’. Beats were provided by two of the “most popular DJs in all of Verona” and other music by some Italian Wedding Singer-type band. The band pretty much blew, but I felt kinda bad for them because they only got to play like 4 songs. Every time the DJs went off and the band went on, the floor cleared. Every time the DJs came back, the floor filled back up. The band dudes eventually got the point and sat the rest of the nite out. Good times. 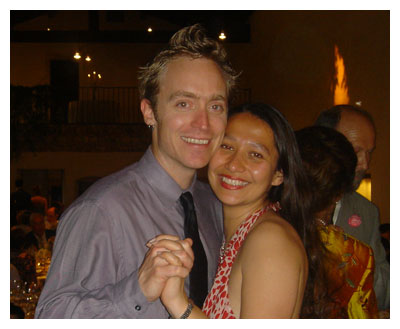 Bussed it back to the hotel and sat up for some late nite drinks with Matteo and Kim. Woke up the next morning jetlagged and hungover, said goodbye to everyone and jumped on a train headed east.