So my boy Todd Gack calls me last nite at 1:35AM Eastern time and leaves me a voicemail saying that he’s at the Georgia Theatre in Athens and REM is playing. I was going to write it off given that it was Apirl 1st and all, but his message also included about 1/2 the song that they played, so I guess the joke’s still on me. Here’s what he had to say in an email today…

Yeah Man, last nite was pretty cool. Had a busy nite checking out an art show at the Georgia Museum of Art. Lots of folks who have hung art in our shop had a big show on campus. Really cool, world class shit. Went downtown and had some drinks, then went to head toward the car to go home bout midnite. Walked by the GA Theater and bumped into some friends. This band the Minus 5 was getting ready to go on. Its basically Pete Buck’s side project with Scott McCaghey who is like the 5th member of REM. Long Story Short, we check it out, half way through the set the stage clears and you see Bill Berry hit the stage first and so you know it’s on. The rest of the crew comes up and they do a killer rendition of Country Feedback. And thats it. Everyone was all REM! REM!, but they didn’t come back out. Anyway, it was still a killer moment. They are such a great band. You forget how awesome they are, and what a killer vibe they can put forward. I really wish they would pull their shit together. If nothing else just to go out on a high note. Well, it was cool that you could hear it over the phone. Stipe can still belt it out.

Jealous? You know it, but more than anything I’m beyond stoked that they’ve still got it. You see, I’d like to consider myself one of the biggest REM fans of all time, up until two albums ago. I’m not going to go into a big rant right now, but let’s just say that Reveal more than disappointed me, and with Around the Sun, I gave it one listen on MySpace and decided that my wallet was going to be staying safely put in my back pocket this time ’round.

So REM, if you’re out there, listen up. Your fans want you back. We don’t want any more Beach Boys wannabe albums followed by ginormo ampitheatre tours where we have to sit far back on the lawn with our binoculars with all the other yuppies who only know “Shiny Happy People” and “It’s the End of the World”. Get Bill back on board, cut another real REM album and do a theatre tour. You know, venues along the lines of The Fox Theatre in the ATL or The Warfield in San Francisco. Go that route, and we’ll forget the two most recent albums even exist.

I’ve got my fingers crossed. 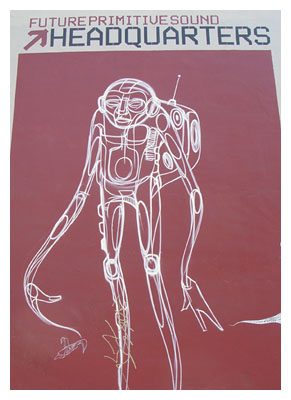 So!, Smokey and I were walking through the Lower Haight today and found ourselves in a bit of a shock as we strolled up on the Future Primitive Sound Headquarters at Haight and Fillmore. They were closing up shop and it was their last day in business.

The first time the Future Primitive name really struck a chord with me was back in mid-1998 when I picked up the Live at the Future Primitive Soundsession, Vol. 2 CD that was mixed in SF by DJs Z-Trip and Radar. On this album these dudes fused hip-hop and classic rock on 5 turntables in a live setting, and actually made it work (years before the “mashup” craze, I might add). The funny thing is, just days later we got invited to a Christmas party at an ad agency, and guess who they had booked as the entertainment that evening? Yup, Z-Trip and Radar. Hip-hop and classic rock fused together on 5 turntables right in front of my face, and it actually worked really, really well. The place was absolutely going O-F-F.

Fast forward a few years and Future Primitive had grown from a small label with a couple of compilation releases to a small collective consisting of a hand picked group of musicians and urban artists. One of the coolest things about this crew was that they they decided to showcase themselves in an easily accessible storefront setting smack dab in the middle of the Lower Haight.

Now, even though I never purchased anything from that store (which, if there are more peeps like me, could partially explain the shop’s untimely demise), I did love going in to check out their art exhibits, browse through their T-shirts and dig into their tiny but quality music selection. For me, memorable artists that showed inside the store included Greg ‘PNUT’ Galinsky, Kelly Tunstall and Mike Giant. I had seen both PNUT and Kelly Tunstall’s stuff in the past at the 111 Minna Gallery, and I think the thing that I really appreciated with both of these artists is how well they were able to show in both types of settings. At FP there’s only enough room to hang a handful of small to medium sized pieces, wheras at 111 Minna you’ve got vertical and horizontal wallspace for days. As for Mike Giant, who I believe was the last person to show at FP, I dug how he painted and drew right on the walls, turning the shop into a piece of art, albeit temporary, within which his exhibit was shown. 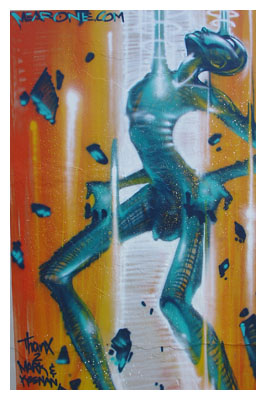 Probably my favorite feature of the Future Primitive shop is/was the artwork outside on the Fillmore side of the building (it’s still around as of this writing!!). These pieces were commissioned by two very well known street artists Doze Green and Mear One. The Doze one went up first, and to my amazement remained fully intact for a couple of years. It was cool to think that people actually had some respect for these amazing works of art that were right there on prime public wall space… and then, of course, some jackass came along and tagged on it late 2005. And it wasn’t event a good tag, which is probably why the idiot did it in the first place. The Mear One went up more recently, and although Mear and Doze have two completely different styles, they somehow looked right sitting there next to eachother.

So, R.I.P. Future Primitive Sound Headquarters. If y’all ever decide to get back into the storefront biz, you should call on Upper Playground for some advice. They somehow are able to keep 3 (and counting) shops in the Lower Haight going, while only regularly having their main shop open for business. I’d love to know what their secret is.